Breakfast and then it's off to the field for the Finals. Chad had received a request late into the night to fly the demo flight for the judges.  Not 100% sure what happened to the 11th & 12th place finishers?

Both John and I accompanied Chad & Agnes and we were able to successfully bypass the security check point as "Demo Pilot":-)  Seems that there is a total ban on anyone but pilots... the Team Manager for Demo Pilot worked :-)

He set up his plane and waited for the 20 person judging panel to settle in to their respective chairs. 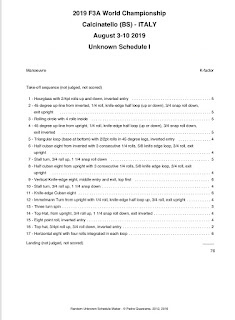 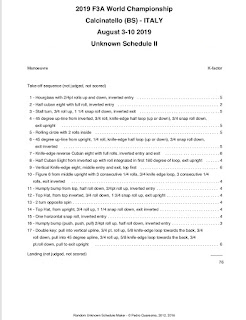 I took a numerous pictures of the Finalist's planes and then we headed back to the AirBnB for the rest of the morning. 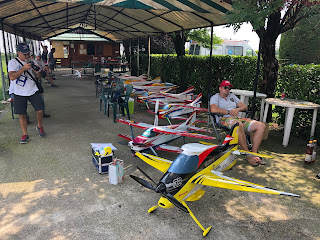 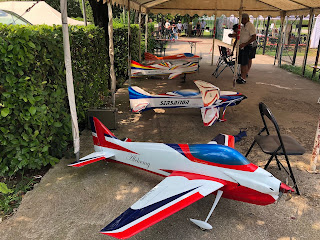 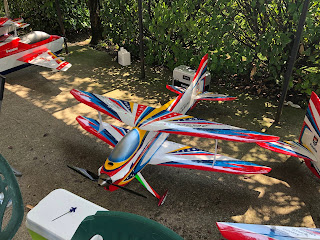 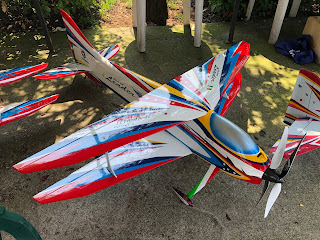 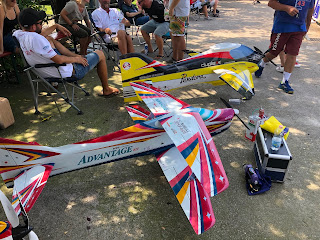 On arrival back at the house, Michi was busy packing his primary for the flight home tomorrow.  Henry has his all done. 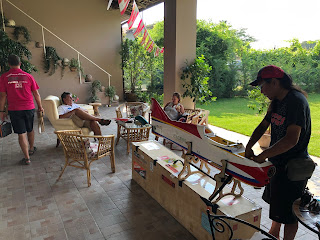 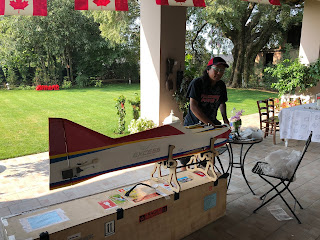 I wanted to post a few pictures of our accommodations for the last two weeks. It was located a short 8 minute drive from the flying site so the location was perfect for us. Also close to shops and various eating establishments. It had four separate bedrooms with a full bathroom attached to each one. They were very spacious and the beds were very comfortable (mine anyway!) Our Canadian Flags made us feel right at home :-) Cost was reasonable as each room was only €85 per night with a €5 fee for each "salty breakfast".  Everyone enjoyed the large patio as well. 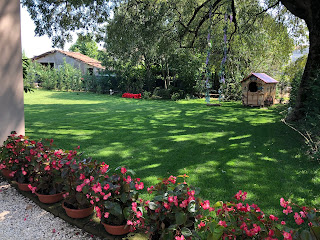 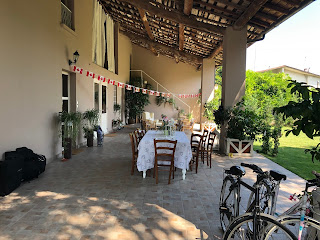 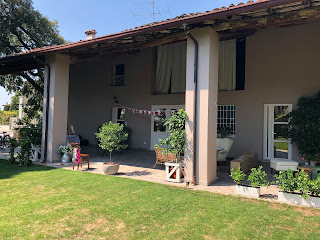 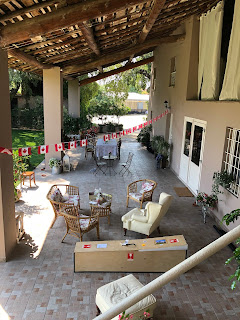 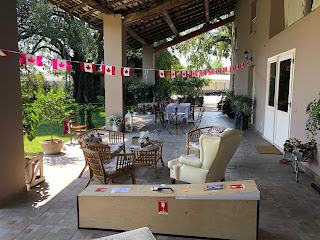 We headed back up to the field to watch the Unknown #1 sequence flown by the finalists. It was very nice to see this level of flying. All of them put up good flights with only a couple errors observed.

The scores that were once available to the public quickly dried up as the organizers kept the results to themselves. When the second F-19 started some of us headed back for a shower to prepare for the last Unknown #2 flights, closing ceremonies and the banquet.

The flights finished and the crowd milled around for a bit awaiting the announcement of the winners. I found out that the awards would commence at 7:30 PM. Chad & Agnes headed back to the car with his plane.

The final placing was taped to the board and everyone quickly took pictures and sent out the results. Canada placed 13th in team scoring.
The pilots all gathered together for a group shot and then individual ones. It was a very hard fought contest and the winner was CPLR.

The doors to the banquet open at 9:30 and the place was pretty much packed. The dinner was served in courses with several different cured meats, artichoke, mushroom risotto, pasta and, while dinner came, they also presented each judge with an award for their work over the last week.....  and that's about when I headed out... it was 10:40 and I was done! I said goodbyes to a few of my friends and headed home.  Chad said they came out with meats etc. but the crowd had thinned significantly. Everyone was tired and I think the long day couple with the late dinner took it's toll... it did me in and I was just watching in the heat along with most people. The food was very good though!

I suspect this is one area that will be better in future competitions as there are plans to have only three rounds for the finals in the next Worlds. This will be very welcome for organizers, competitors and spectators I think.

I will head to the airport in the morning and catch a flight to another "World's" event as Kelly's Pipe Band is playing in the World Pipe Band Championships in Glasgow, Scotland.