06:30 Alarm, shower, breakfast then off to the practice site.
We chose a closer field that was only a 20 minute drive from our place on more rural roads... very pleasant after the A4!

John was already there waiting for us... hey he is keen! We parked alongside the field and started flying. Unfortunately Henry cracked his right gear on his first landing and was out of commission for the time being. I tried to use my contacts to get a hold of Andrea Stockwell but no joy at this point. 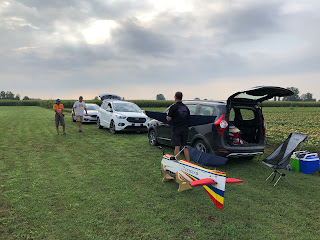 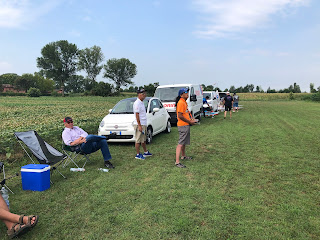 Henry prepped the gear leg while Chad put in several rounds. The Japanese team arrived and after the usual introductions they joined the flight order.  I was busy trying to contact Andrea Stockwell of the South Africa Team 🇿🇦  Once again Mark Atwood came through and after a bit of time we got chatting on WhatsApp.

It was good to see these guys fly the P & F schedules as we had a front row seat to the action. 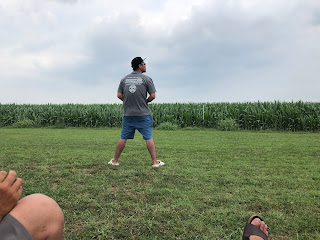 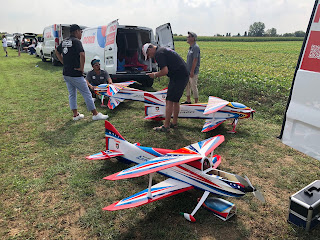 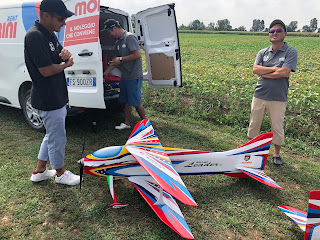 The Czech team of Milan Valenta and Frantisek Pokomy also arrived and joined in the flying order. They had a super paint job on the Ultron. 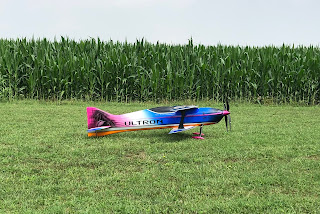 We had several flights and then the gals arrived and brought out a lunch for us. We had huge fresh made sandwiches stuffed with meat and cheese... all very good!
More flights ensured and we had front row seats to the Japanese team members.  They all flew well under wind conditions. We even had a close look at the 32MZ. 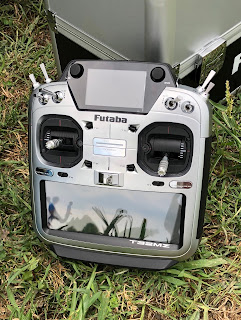 The gals headed to the lake while John drove up to the contest site to retrieve the carbon fiber tow that Henry needed to make repairs.
Chad was done flying so Michi put in one more flight before we packed up under threatening skies. On the way home the skies opened up and the winds increased dramatically.
We finally communicated with Andrea Stockwell and arranged for the CF tow to be picked up at the contest site. Henry went and grabbed it.

While sitting around the table we received a Facebook post containing the flight order for Sunday's flying. It did not show times but listed the contestants... Henry is up #2 on Flight Line B, Michi is #14 on the same line and Chad is #20 on Flight Line A.... all on Sunday morning.

Seems odd to see this post before the Team Managers have even seen it... such is life in the cyber age.

We drove into town and had a nice dinner in the main square then to the gelatto shop for a desert.