Up at our usual time for breakfast. A few stragglers today as we have the morning off.

Our pilots fly late in the afternoon and into the early evening so a quick trip to the practice field is in order.  Chad, Michi, Henry and I headed off while Kelly gets packed up as she leaves for Scotland in the morning. Agnes and her will head into town later this morning for some supplies ( read big spray!) and lunch.

On arrival at the practice site we met up with Gavanas Charalampos from Greece and Nicolas Georgiades from Cyprus who were just packing up to head to Flight Line A for Nicolas's flight.

John arrived at the practice site and the guys put in a several rounds. Henri was going to just relax and watch the flights today as he says he is as ready as he could be. More discussions ensued on setup, judging criteria etc as we try to coax the maximum points out of each maneuver.

The Ukrainian team arrived and we exchanged pleasantries. They put in a flight each and then bolted to the main site for their rounds later.

We packed up and drove back to the airBnB passing the Japanese entourage going the other way. We cleaned up and relaxed as Henry does not fly until 16:00 today at Line B. Michi will follow at 18:00 then we change venues to Line A for Chad at 19:20. 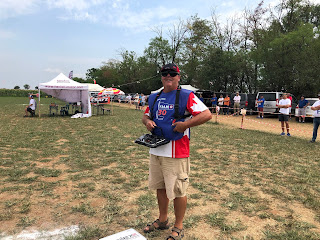 Henry was up first at Line B and we reminisced about his last Worlds 34 years ago in 1985!! He laughed at how long ago that was.

He had an OK flight but never really got into a rhythm with the wind. He scored a 396.50 after having his plane re-weighed. 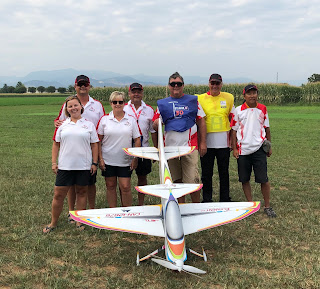 We posed for the obligatory group shot after his World's competition ended.

We watched the flying and talked with many different pilots and friends. It was a nice relaxed atmosphere although the flight line was starting to push the pilots in an effort to get done before the rains arrived. Dark clouds filled the western horizon.

Michi was next up and had an OK flight. Strong winds made him work hard to maintain position and he did get behind the plane a few times. All in all he was happy. 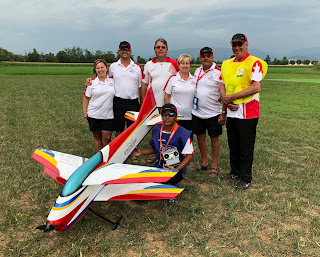 We packed up and moved over to the other flight line for Chad's final P-19 flight. the weather was off to the west but the radar was showing a large cell headed our way. Chad got his planes ready in the parking lot and we then waited for his turn.

At this point we had four pilots to fly at Line A and the rains started. We all moved the equipment under shelter as both rain and winds increased. Chad took his backup apart and loaded it into his van while John stood guard over the primary ship.


Andrew Jesky took his backup Proteus up for a ceiling check once the rains stopped while Chad reassembled his plane.... again! Unfortunately the skies opened up and he quickly landed in moderate rain. The folks on the field quickly took cover.

The Contest Director called the flying over for the day and the four pilots on Line A and three pilots on Line B would fly on Friday morning sometime. (nothing official as of yet but 9 am was mentioned... we are awaiting official notification of the times from the organizers)
I planned on attending the Team Managers meeting to pull Chad's draw order for the Semi-finals that go on Friday but with the weather issue it has been postponed. Once the preliminaries are completed then the draw will take place.  I will also post the individual Round 4 score sheets once they are released after everyone has completed their respective flights.

As I am scheduled to drive Kelly to the airport in the morning, I have made arrangements with the officials to have John Bentley attend the TM meeting if I have not returned in time.

We grabbed pizza on the way home and relaxed a bit. With everyone exhausted we all hit the rack. Day 4 continues tomorrow morning!