Up and at it early this morning as we have our first competition day.

Henry is up at 08:10 so he went up early to get his planes ready. John will meet him up at site B.

Kelly and I followed with the competitor bibs for both helper and pilot. On our arrival John was helping assemble the backup and I checked the flight line clock and general field setup.

Bib numbers are as follows...

Henry has his battery voltage checked and then he was given a minute to check the radio. Then a 2 minute time period to hook up the batteries and get the airplane out to the runway. (The time limits are an  effort to stop delays.)

Once the wheels touch the ground then the 8 minute timer is started. He must complete all required maneuvers within that time or be penalized a zero score for each one that is not completed.

Henry’s flight went well but the winds took their toll as they grew stronger with altitude. Overall a good first effort!

Michi’s turn, flight was good with some minor wing position issues. He was happy overall.

We packed up and moved to site A for Chad's flight .

Chad put in a solid P-19 round and  flight.  The scores have been updated and I copied a list below. computer shows a third place on this panel. Individual score sheets are here 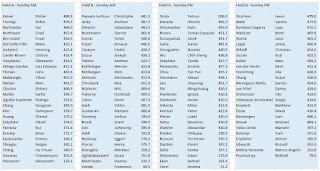 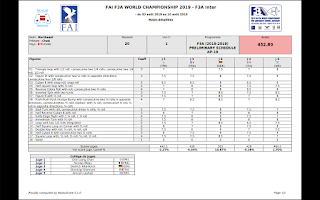 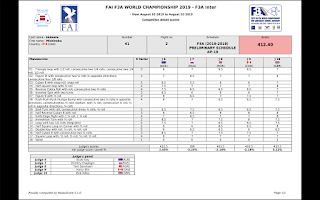 We stayed and had lunch at Casa Bianca and then headed back to the airBnB to get changed and then come up with a plan. I am thinking practice field :-)
Kelly played her pipes while we headed to the practice field. Henry is struggling to maintain the “practice schedule” so he is taking the afternoon off. Chad, Michi, John and myself headed to our not so secret field and found numerous teams there. Japan, Lichtenstein, Greece, Israel and of course the Czechs (they are camped out)

Luckily they are all leaving so we were soon alone with the Czechs👍 who went silent. Numerous flights ensued and we decided to "group tune" Michi's airplane. We succeeded and he should be much happier now. We packed up and headed home.
The gals found a super mall and have many bags loaded into the car....  these are the pictures I have been sent!


We walked over to the food festival a block away and after figuring out how to order, enjoyed a nice meal of calamari, mussels and lasagna. Gellato for dessert!  It was a great authentic food experience. 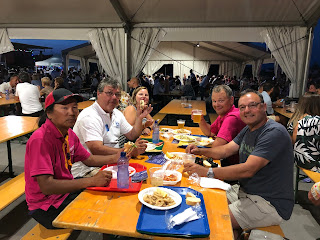 We left and headed home... and a huge fireworks display started! We enjoyed it from the roadway. For such a small little town it was amazing! 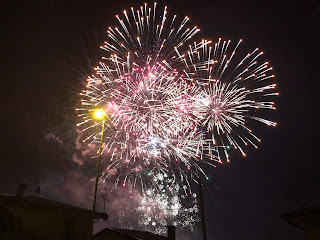 Off to bed...  but before I go, a shout out to the Greater Victoria Police Pipe Band on their way to the World's in Glasgow.... safe travels! see you soon!
at August 04, 2019 No comments: